There’s heartbreaking news: my sweet LG phone has officially taken its last vibration, gotten its last ring and received its last text message. I decided to finally retire her (it’s purple) after I received a text message and it started doing this crazy dance on the screen. Basically, she has been put to death via lemonade. You will be missed.
In other news, I’ve decided to mark Sunday’s as a day to wrap up the week… IN PICTURES! What better way, right? I suppose I will take pictures of the most random things I come across during my week, and since this idea came to me at, eh, 4PM today I only got three sweet shots. Let’s begin!

These sweet suckers were found in T.J. Maxx. Who wants these things? I’m almost sure that they are multi-functional. 1. Shoes! 2. A hammer! 3. A Defense Weapon! See, point made. You would still be making a terrible fashion mistake though.

Now, this was spotted at a local Bealls. I just want to know three things… why is her hair silver and why is her posture so horrible? And why is she kissing nothing? I guess I shouldn’t be too surprised that this was found in Bealls. 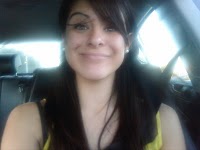 Oh yeah! I wanted to share a funny story. My little brother was telling me about how he was wearing tidey whiteys… under his boxers. I asked if he started wearing boxers because of the guys in the locker room and his response was “Well, I saw my friend get depantsed (sp?) one day and I was so so so scared. I knew I couldn’t let that happen and be caught with underwear!” Boxers it was. You are now free to depants Daniel.

Well, that wraps up my Sunday. I must continue with my thoughts and their never ending process. I also really miss my boyfriend; quite terribly, actually. Where is he now? Somewhere in Texas… probably. Yes.

By the way… if anyone actually reads this, please feel free to comment! I’d love to know how creepy I am.