>Forgive my submarine blogging! Apparently, I forgot about this thing for nearly a week. I have one question…

Well, I know I’m back. I also know that Michael Jackson died, which to my surprise, is no surprise. Billy Mays, however, I am in shock about. Sure, the death rate per person is still 1 to 1, but come on… Billy Mays?! I thought that guy would be yelling about how great I was at my funeral. I suppose that is out of the question now, and so is my invention of the “Billy Mays Alarm Clock”! This poor mans death has slightly put a damper on my life. Did I mention that I am no longer selfish?

I guess I can reveal what I have been up to for the past couple of days. I shall do so with pictures: 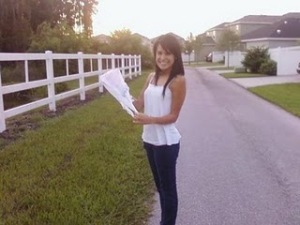 Step One: Prepare the bag

Step Two: Hold your nose and do the deed of the scooping the doo.

One can imagine what it’s like to have a boyfriend who house sits and has to walk the dog in a neighborhood where alarms just may be set off if a dogs prize is left on a lawn. So, since the boyfriend is too much of a pansy to pick up the poop, the girlfriend steps up to the plate and takes it on. If you’re wondering… yes, it’s warm.

I’ve also been very busy attempting to save money for New York and crying to the movie ‘My Sister’s Keeper’. I literally had to hold back from weeping, but so was every girl in that theater. Whomever decides to read this, I feel for you. My life is a big ball of floating awkward and unstimulated fun. Really, you should hang out with me. I promise we’ll do nothing.

1 thought on “>My inability to be normal.”