If you’ve ever visited the dentist, you can probably attest to the fact that it is incredibly difficult to have a full-out conversation with the person working on your mouth. I, however, have to say that I have just experienced a dentist appointment in which a full-out conversation did in fact happen, and not only did we converse in a manner in which the drool sucker (I attempted in Google search of what a drool sucker is called, but no such luck) was taken out for immediate answers from my mouth that was being cleaned, it was meaningful. I mean, I think I helped my dentist out with family problems. Who knows why he chose me to spill his family life on; I just hope I helped him.

Most of the conversation had begun its march after I talked about my dad and his absence in my little life – I told you it was deep – and then he kept saying I liked the subject of Psychology. This, I do not know where he got, but his assumptions were because I “analyze”, which, to some extent, is true. I do know that I did leave the appointment with that feeling of Information Overload and decided to file it in my “That was strange…” file. But as I am drawing it back out, I have been analyzing why I am the way I am. I’d like to label this file “I yam.” 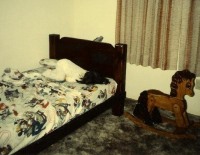 Just this morning I texted my mom asking her what elementary schools I had attended. Unfortunately, with the moving every two years of my life, I attended approximately three or four elementary schools. I can only name a few – Oak Forest Elementary (TN), Fernandez Elementary (TX), Sanford Elementary (VA) – and I still believe I am missing one. I specifically remember a school where we had a greenhouse where we would do little hands-on projects. That was the first time I learned that these specific butterflies were only alive for about 11 days. This was after raising my little caterpillar, watching he/she turn into a beautiful butterfly, and setting it free in our greenhouse. You can imagine my surprise and my sadness as a third grader. I think I wanted to rescue it and have it beat the odds. I also remember attending a school where they beat kids with a paddle; I swear I can still hear a little boy scream as I walked past the office.

All of these little memories that my mind so vaguely stored has made me nostalgic. Not in a “wish I could do it all over again” way, but more in a sit-down-take-out-the-photo-album-and-spread-every-picture-on-the-floor type of way. It almost seems surreal to think about how I so vaguely remember my first day of Kindergarten or how I remember reading Anne Frank in 5th grade because her story inspired me… plus someone said I looked like her, so I had to find out who this girl was. It’s these little moment of innocence that seem so precious to hold onto, because as we get older their distance becomes greater between each memory.

These memories, that were once reality but now enigmatic, have become my chemical makeup. I have taken something from each happening and my memories serve a purpose as to who I have become… or who I yam. It isn’t an indepth analyzation of who I “yam” or who I am becoming, it is more of a skim of my little life and all the innocence that had surrounded it. My memories attest to just that.

I did leave with one comment that lightened the mood. Doused in a heavy accent, my dentist said: “You may look 15, but you act and talk like a 25 year old.”