I have wanted to start writing this blog entry for some time now, but I kept stalling. I didn’t know where to start, really. It’s enough to turn on the news each day and think, “There’s a headline to go with!” … but then another one turns up and then there’s too many to count. So, where do I start? I’ll start with myself.

As a type One on the Enneagram, I am idealistic yet perfectionistic. I can easily get caught up in how a situation or person or room should look or feel. At my unhealthiest levels, I am the nose-up Pharisee bound by rules and regulation; obsessed with this should be that. And while I can see where the Pharisee’s were trying their best — the Law was all they knew and they gave their life over to it. But they also had a really hard time taking off the blinders when the actual Son of God was standing before them. Jesus was both gracious and humorous in how he chose to approach the condemnation from the Pharisees. This, I think, kept surprising them.

At my healthiest levels, I can see where I am being too stubborn and, well, hypocritical. Majority of the time, the “rules” apply only to myself.  But other times, I want them to apply to others. When it’s only me, I can choose fluidity in how strict these rules are applied. Toward others, I want the rules to be just as harsh as they are on myself with zero wiggle room. What a world my mind is!

I hope that by writing this out, the reader sees that I know the chaos of this spectrum. I can take radical swings to and fro, and because of that, I know all too well what extreme fundamentalism can taste like. 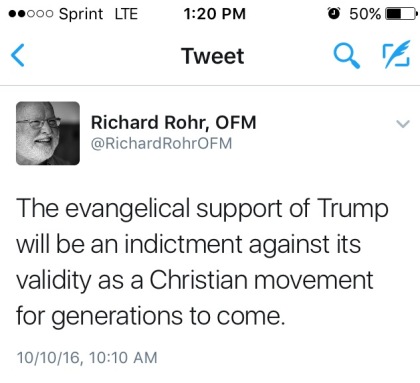 What I am seeing most in the hypocrisy of Evangelicals is the insistence on “x or y” and disregarding everything else outside those boxes. Much of this reflects in how Evangelicals vote and who and what they support. There is the twisting of scripture to fit this strict framework, which is how we end up justifying immigrant children being forcefully separated from their mothers. It’s how we can fight for “religious freedom” for Christians but not for Muslims.

A few topics I would like to touch on within this post are women’s health rights, morality with regards to politicians, gun rights, and social and racial justice. Other specific topics that remain unspoken are still just as important: environmentalism, sexism, homophobia, xenophobia, and hierarchical (mostly male) privileges and powers within the Church.

Women’s Health Rights
As a woman, what I am repeatedly surprised by are the number of men who take it upon themselves to speak into what rights I have over my body. This includes the quality of gynecological and maternal care I receive, whether an employer has a say in my birth control prescription, and abortion rights.

It seems Evangelicals want all the say when it comes to these issues. But when we look at the facts, the US, for the developed country that it is, still has the worst maternal care rates and maternity leave policies. That’s enough to make this mom-to-be feel the flame of fury. Then there’s a prevailing school of thought from the Evangelical side on the birth control — the literal act of taking a pill — calling them, “abortion-inducing drugs.” This is both untrue, unfair, and wholly misleading.

Lastly, I will say only this about abortion: if the fight against the abortion does not follow the model “from womb to tomb,” then I believe an argument against abortion is, at best, invalid. What does “womb to tomb” look like? Loving support for both the orphan and the inmate on death row. I would even go so far as being against the death penalty.

Isaiah 58:7:  “Is it not to share your food with the hungry and to provide the poor wanderer with shelter— when you see the naked, to clothe them, and not to turn away from your own flesh and blood?”

Morality of Supported Politicians
The Evangelical justification (~80%) of putting someone like 45 in office will forever astound and stump me. To dismiss words and actions — against women and children no less — in order to further an agenda, is perhaps the most hypocritical act of all, and brings us to where we are today. Suddenly, the consistent Evangelical call to “purity” need not apply.

Here’s Rachel Held Evans, a Christian author, on this matter: “[Mike Pence] has stood by with a Bible tucked under his arm as the president has lied repeatedly, bragged about sexual assault & infidelity, exploited racism, traumatized migrant children, and incited hate & violence against minorities & the press. He’s just as guilty, just as immoral.”

Gun Rights
I believe I am an unofficial Anabaptist. As Bruxy Cavey so eloquently wrote in a series of blog posts, “the nonviolent, enemy loving, peace making way of Jesus” is where I plant my feet. And while some Evangelicals celebrate their gun ownership — out of love for hunting or sense of protection — I ask how there is justification for the right to bear arms when the lives of women and children are still most affected? I cannot ignore the mass casualties of individuals and families at the hand of guns. Until common sense gun laws are passed, I am unable to draw a coherent line as to how Evangelicals explain away the necessity of owning them. They remain, to me, a false sense of safety.

Social and Racial Justice
I’ll start in with the latest news on these two fronts: The release of the signed article on “The Statement on Social Justice & the Gospel” circulated by John MacArthur. In it, he denies the relationship between Christ and Social Justice or, in biblical terminology, reconciliation of all things unto Christ. There’s also the “denial” — I don’t know how you actually deny lived realities … but we also have a President who dwells in “Fake News” land — of “intersectionality, radical feminism, and critical race theory.” As of today, this statement sits at 7,755 signatures from pastors and other Evangelicals. It’s incredible how nothing on the abuse of hierarchical male privilege and power within the Church is mentioned.

I wish I could make this shit up. But I can’t. Instead, I sit at a computer screen, baffled at what has become of the Western Church. It has been whitewashed and plagued by an evil selfishness I will not dare be silent on. When scripture told us Satan’s goal was to steal, kill, and destroy, I took that seriously. It is a lens through which I must see how I, as a Christian woman, whose Earth and soil identity is proudly Mexican and Native American, and Universal identity rests in a Cosmic, loving and whole Christ, fights against just this.

I believe the Church body is big enough to support differing beliefs and theories, but I do not, however, believe the Church body is strong enough — nor was it intended to — hold the weight of hate. Our foundation should crumble at any degree of support of oppression, violence, and/or marginalization. The moment we find ourselves locked in line with lies, we are out of step with the wholeness of the Spirit.

My friends within the Church who still support 45 and his colleagues: I want to assure you this version of Jesus that has been sold to you will fail you. Remember, Jesus never registered as Democrat or Republican. Instead, his time was spent with those who faced oppression (the paralyzed man at the baths); violence (the adulteress); and the marginalized (the Canaanite woman and her possessed daughter). His politics were those of healing, not condemning. They were in support of the equality of women and protection of the innocence of children. They were always non-violent and always loving.

I don’t know how else to shake us all awake. Richard Rohr was spot on in writing the Evangelical support of 45, and the hate-filled policies that flow from this administration, will haunt the Church. We have a rotting limb, friends, and it needs to be cut. My greatest hope is that we see this and begin the work of sawing it off.

1 thought on “The Hypocrisy of Evangelicals”